Dating Dilemma: Is It Ever OK to “Research” or Creeping Your Date Online?

In this day and age it’s hard to keep anything secret. With things like Social Media and Google, the snooping possibilities are endless. New employers are now using search engines to find out more about potential new employees before determining whether or not to hire them. With online dating, I’ve said before there’s a false sense of security, so maybe a little research or creeping is a good idea.

People are typically nosy by nature, and, if the information is there why not access it? Especially if it’s going to help us. We’ve all done it. We’ve all creeped someone’s Facebook profile. We’ve all “Googled” someone, or even Googled ourselves. But, that begs the question, if it’s possible to look someone up, is it ever OK to research your date online? Privacy is important and we’re all entitled to have privacy, but if you post something publicly, shouldn’t you expect that people will find it? Well, I don’t think there’s really a yes or no answer … I think it depends on the situation.

Is It Ever OK to “Research” Your Date Online? 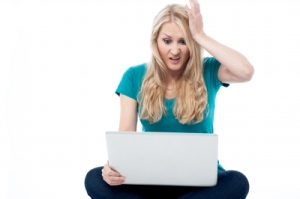 I haven’t done it often, but I do admit to researching some of my dates online. A while back, I was faced with this particular dating dilemma. I met someone who seemed too perfect. He was just what I was looking for, but something didn’t feel right. You know that nagging feeling that tells you to raise your radar? Ya that one … Well, I kept looking for red flags when chatting with him but couldn’t find any other than that gut instinct of mine. So I thought I would just do a little research. So I did. I Googled him. Go ahead and judge because I’m not sorry I did. What did I find out? Well, I found out he was married with a new baby. Everything else he said was absolutely true, except that he left that little detail out. That’s the thing about manipulative liars, they tell you enough half-truths that you believe them because the stuff they tell you checks out, but they leave some very important details out.

So what happened when I confronted him? Well, he completely denied having a baby or being married. I sent him a screen shot of his Facebook page and asked him if that was his profile, he said yes but that his profile is closed to the public. I responded that sadly (for him) it wasn’t. I asked him who the baby was and he never answered. He kept avoiding the question, even though everyone was congratulating him on the baby and his only sibling kept gushing over her new “niece” in the profile comments. I urged him to come clean but he kept denying it. I couldn’t believe he didn’t man up even after he was caught. Needless to say, I didn’t continue speaking with him.

I will admit I rarely look someone up, the only time I do is when I get a feeling that something is “off”. I usually just go with the flow. The only other time I did was when I dated someone who talked big about his über success. I was curious, so I did Google him and found out that he was wealthy but it was because he had duped a significant number of investors out of millions of dollars in another town and the case was still in the courts. Everything else he told me about himself was true. But, again, they were half-truths. I didn’t confront him about it though, I just stopped seeing him.

I’m not saying that you should go out and be paranoid, or research all your dates, not at all. Creeping isn’t the answer, leave something to the imagination. Just date smart and use your gut instincts always. You know when something feels off. When it does you should absolutely trust it. Once I learned to trust my intuition, it’s never veered me wrong. So is it ever OK to research your date online? Well, if the information is out there and public then it’s fair game. I think it’s more about the intention behind your “search”. If you’re just doing a little research for non-stalking purposes then I think it’s OK, but it’s never OK to stalk someone online, nor is it OK to snoop for the sake of snooping. Creeping your date online isn’t a best practice because you never have the whole picture. Cyberstalking? No. Creeping? No. Researching? Maybe. I believe we are responsible for protecting ourselves from shady people, because goodness knows there are a lot of them out there, but don’t be obsessive about it. Most people are NOT out to get you, nor are they frauds, but frauds do exist, so dating smart, especially if you’re dating online, will protect you.

READERS: Have you ever researched your date online? Did you find anything interested? Did someone ever research you? I would love to hear about it in the comments below!