Do Strong Women Scare Men Off?

So here’s the dilemma – gender roles aren’t what they used to be. For one reason or another, women are much more fiercely independent than ever and that’s not such a bad thing. Not at all. Women are in positions of power, they are gainfully employed, they own their own homes, they travel on their own, they live fully happy lives without the assistance of a man – women do it for themselves. They CAN do it so they do it. No one is disputing how significant this is. It’s awesome! But, how does this really affect men? How does it affect dating? My question is: do strong women scare men off?

Do Strong Women Scare Men Off? 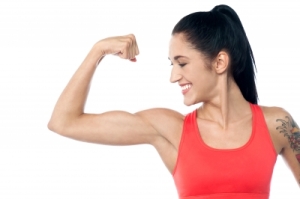 I recently had this discussion with some good friends of mine. We’re all strong, fiercely independent women who never had anything handed to them in life. We’ve worked hard for what we have and have accomplished many amazing things. We have learned to do things on our own without anyone’s help, especially men. Personally, I have done it as a necessity, not as something I particularly want. Trust me, I would love a man around the house. I am very much a traditionalist when it comes to gender roles. Yes, I said it.

I believe men should be men and women should be women. I love taking care of my man and doing all the traditional women roles like cooking and cleaning and making him feel like a king. That’s just who I am. But, I also expect him to be a man who takes on that dominant protective role. I think it provides balance. Maybe some people will think the way I think is backwards and women and men should be equal and yay women blah blah blah. Hey I totally agree that women and men should have equal opportunities but I want a man who takes care of me physically, emotionally and mentally and I will, in turn, take care of all his needs. Is that too much to ask?

Wanting Men and Not Needing Them

Do women need men? Nope, they don’t. Do they want them? Hell yes!! I’ve said a million times before that we shouldn’t be looking for our other halves, we should be whole on our own and find someone who is whole on their own. Together we are two people walking side by side in the same direction. We don’t exist because of the other person, they don’t make us complete, we exist on our own. When you are not looking for someone to “complete” you then your relationship will be a healthier one. You are not reliant on them for your happiness. How great is that! If you can’t be happily single then you can’t be fully happy with someone else. It’s true. Think about it. Your baggage is dealt with so you can fully commit to a person of your choosing, not because you are afraid of being alone. Plain. Simple.

Strong women don’t need men, they want them. But, do strong women scare men off? Nope. I don’t think so. I think how some strong women act scare men off. Let me explain. Most men love to see a woman who’s accomplished and independent. They are inspired by women who follow their dreams and have goals in life. Most men have absolutely no problem with that. Some do, especially in some cultures, but that’s a completely different story and I won’t be addressing that in this post. But what men don’t like is the woman who has to flaunt her independence and success and constantly telling men that she doesn’t need them because she’s accomplished everything and has this and that because she earned it herself. Super duper. Good for you. Who cares.

I mean we get it and good for you but seriously, why do women feel the need to keep reminding people, especially men, what they accomplished ON THEIR OWN. I can’t tell you how many times I’ve heard the whole “look what I have” from women. I’m here to tell you that you shouldn’t have to tell people, especially men, let them see it for themselves. Why do women feel the need to prove themselves? That’s what turns men off. It’s not that they are strong and successful. It’s when women insist on emasculating men and show that they are just as good as them. Why would he want to stick around for that? I don’t even want to be around these types of women. I never sit there and list all my accomplishments or possessions on a date. They don’t need to hear how many university degrees I have, or how successful I am or about owning my home. You get the picture.

Femininity is a Good Thing

What men do want, and what they’ve told me time and again, is that they love a strong woman who can hold their own, who doesn’t brag and constantly remind them of what they have, who doesn’t emasculate them every chance she gets AND who’s feminine. What does that mean? It certainly doesn’t mean being weak or changing who you are to accommodate anyone. It also doesn’t mean being the ditsy Barbie type. But a woman doesn’t have to be like a man in order to be successful.

Femininity means different things to different people but some examples could be:

Men aren’t scared off by strong women but they are turned off by a strong woman who acts like a man and a strong women who has to keep telling him how strong she is and how she doesn’t need him. That’s it, that’s all. So be a fiercely independent strong woman but don’t brag about it. No one needs to hear all that girl power BS. I even hate it. I think it’s awesome when women accomplish great things and defy the odds, but really, I don’t need it in my face, nor do men who are looking for potential partners. Ladies you have nothing to prove to anyone, least of all to men. Just be the fabulous person you are and let them realize how awesome you are on their own, you don’t need to tell them and remind them of it all the time. I’m not saying to tone it down to make a man happy, I’m saying there’s no need to flaunt it. I’m also saying let him be a man, let him open the door for you, thank him for his kindness, let him do stuff for you – even if you can do it yourself. It’s a no brainer. It’s about mutual respect and appreciation. You are women but I don’t want to hear you roar. Please and Thank You. Plain. Simple.

READERS: These are my thoughts on the subject but what do you think? I’m sure many of you don’t agree with me … But, do strong women scare men off? When you think of femininity what comes to mind? I’d love to hear your thoughts in the comments below!