Dating Excuses Men Give … Are They Legit? A Man’s Perspective.

So someone’s cancelled on you the last minute, or, they just can’t be in a relationship right now because they aren’t ready, or, they couldn’t respond to your text for 5 days because something happened … blah blah blah. Dating excuses happen, some are good, some are bad and some are downright ridiculous, but, are they legit? Can you believe them? I mean some seem plausible, but, are all dating excuses created equal? How do you know if they’re being honest or if they just got a better offer? Well, unless you’re pyschic, you don’t know, but I asked a guy friend of mine who does do a lot of dating (and excusing) what he says and what he means … here’s what he said about dating excuses.

Snap, there goes the date.

Could be minutes before, hours prior, could be a few days before, but the date you were looking forward to is toast.

Now you are left pondering: Was that a legitimate excuse or was I just snowballed?

Men are rich with dating excuses – some are actually legit too – but too many times you suspect it’s a lie, a ruse, a fabrication.

With that in mind, here are five of the ‘greatest’ (and well-used) dating excuses that will get you suspecting.

1. “Sorry to cancel. Work is just really busy. Crazy busy!”
Unless your name is Bill Gates, work just IS NOT that ingrained in your life. Most of us slog through the 9-5 cycle and actually shy away from “really busy” work assignments. Hearing this line? Be highly skeptical people.

2. “Was on way to meet you and car broke down. Have to cancel!”
If this was legit, my mechanic would be as rich as Bill Gates. It’s as well-used as my corkscrew. If you’re feeling particularly snooty, ask buddy to snap a photo off his phone of the damage and text it along (since he’s so adept at texting, cough). 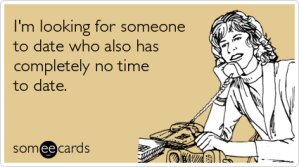 3. “Have to postpone. Family emergency!”
Ah yes, the good-old family emergency. The fact that there are zero specifics, e.g.: “Grandma got run over by a reindeer,” makes this a potentially infallible lie. It’s also hard to call him out on this, cause if it’s true you’ll be drenched in embarrassment.

4. “Coming down with the flu. Have to cancel.”
Another time-honoured gem. Actually knew a guy who would stuff Kleenex up his nose and go the extra distance with a PHONE CALL! Just hearing that congestion in his voice was brilliant deception. Feeling snooty (part II)? Offer to drop off some soup to his apartment and then check the wastebasket for discarded tissues.

5. “Can’t do it this week. Vacation. Leave tomorrow for [insert location].”
Offer to drive him to the airport. If you’re lucky enough to corner him in this potential lie, he’ll likely trot out that, good God(!), there’s a FAMILY EMERGENCY as well.

So there you have it. Have you heard any of these dating excuses men give? I know I have, but I will admit I’ve also given some of the same ones too. The reality of dating is that people come and go, and, sometimes better offers do come along, or, you change your mind, or, well, you just aren’t interested anymore. Excuses are our way of letting them off easy, or so we think. I’ve learned that honesty IS the best policy so why not just be honest? I’ve made it a habit just to be honest about not wanting to go on the date anymore.

Sometimes, I really am busy and something really does come up but how do you know the difference? Well, you know because they reschedule right away. What do I mean? Well, something came up and they can’t make it tonight but they are free the next day and make plans to meet up with you. It’s as simple as that. I’ve rescheduled dates because of things that have come up and have followed through. That’s how you know if the dating excuse is not just an excuse, that’s how you know it’s legit. Plain. Simple.

READERS: Have you heard any of these dating excuses or given them? Has the person rescheduled? If you’ve given dating excuses why didn’t you just be honest with the person that you weren’t interested anymore? I’d love to hear about it in the comments below!