He Loves Me, He Loves Me Not. If You Have To Ask … 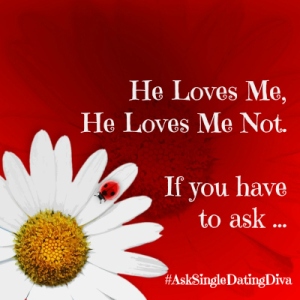 It’s the age old question, something we learn as children … we take a flower and pluck the petals and say “he loves me, he loves me not” and keep plucking until you get to the end result … so does he love you? or are you out of luck? Well, if you have to ask then, let’s be honest, he probably doesn’t. Harsh? Well, not really. Realistic? You better believe it!!

Something I’ve learned in my many years on this earth is that we complicate things more than they are by trying to see things as we want them rather than how they really are. We analyze situations and actions and reason the solution or answer we want. Nowhere is this more true than in love. When we so desperately want someone to love us we will find something, anything, that will prove it to us. But, really, we shouldn’t have to. If someone loves you then you will just know. How? Well, their actions and words will leave you no doubt. You won’t even think about it because you’ll just know.

He Loves Me, He Loves Me Not. If You Have To Ask …

I get so many emails from women trying to decipher if a guy likes them or not. Time and again, it’s different versions of the same story over and over again. Time and again it’s so blatantly obvious that the guy is just not into them, but, wishful thinking prevails and they dig into the depths of communication analysis to see what they want to see. We’ve all been there. Me especially (more times than I’d like to admit!). You just have to look at the most popular posts on my site to know what’s on people’s mind … which is on top? Signs That He Likes You … which is no surprise. But, wondering how to really tell that he’s “just not that into you”? Well, easier said than done, right? Wrong! I found a great list in Psychology Today that I’d like to share with you …

He “loves you not” and just not that into you if …

He “loves you” AND totally into you if …

So there you have it … does he love you? does he love you not? well ask yourself the honest question and you actually know the honest answer because if you have to ask, then 99.9% of the time, he loves you not. So move onward and upwards to someone who is in to you and that can really truly love you enough that you don’t have to ask the question because you’ll just know.

READERS: Have you ever been left questioning if someone “loves you” or “loves you not”? What did you do? How did you find out? What were the red flags you encountered? Would you add anything to the lists above? Share your thoughts in the comments below!