5 Ways to Know If Someone You Met Online is a Fraud: Guest Post 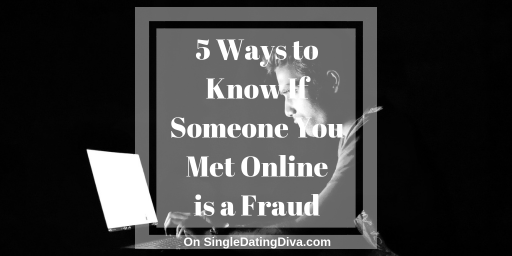 It seems like you have found the perfect partner. You met them online, and what they have shared with you about themselves makes you trust them on a deeper level. They might be halfway across the globe from you, but somehow you feel like you might actually be falling…in….love with them. Wait, what? Before you allow yourself to get overly attached to this person, you have to make sure that they are “the real deal”.

In a study done in 2013, 35% of married couples met online. This is great, and this might restore a little trust in humanity and make you rethink the idea that everyone out there is “out to get you”. More and more people are using internet dating sites in the hope of finding the love of their life.

But on that same note, more and more cyber cons are showing up all over the place and it’s becoming hard to tell the difference between a real person and just another scammer online. Falling for “the one” online only to find out that they really aren’t all they sketched themselves up to be, isn’t only heart-breaking, it also damages you and makes you seriously skeptical about future encounters.

So, to get back to the real business, here are some red flags that you need to be on the lookout for when you want to establish if they’re a fraud or not:

1. It’s in the way they describe themselves in their profile and the pic itself

Seriously, you just need to take a closer look. What do they describe themselves as? Their physical description of themselves should be rational. An athlete with a “plush” body, really? The best way to establish if they really look like what they say they do is to ask them to send you a picture where they’re holding a specific item, or even something that is hand written, close to their body. The other thing that should be setting off alarms is professional photos used for profile pics, unless off course they really are a model. A seriously cool tool to use is Google Goggles, where you can see if the photo they sent you has been used anywhere else online. If they’re using someone else’s pictures and posting them as their own, the warning bells should be very loud by now.

2. Their profile seems a little “cut and pasty”

Try using plagiarism scanners to see if his “introduction letter” online has been used anywhere else or by anyone else. You should be able to spot a phony immediately based on this. A real person, with honest to goodness intentions would be strong enough to set up their own letter and really allow users to get a peek into their life and what they’re all about. It obviously goes without saying that their grammar and spelling should also be good. Loads of scammers give themselves away here. Open your eyes and actually READ what they have to say.

If they’re trying to get you off the dating site and on to email or personal instant messaging right from the word go, you should be worrying. Sure they might seem legit, but do yourself a favor and create a different email address exclusively for use in the online dating world, where they won’t be able to get a hold of any of your personal details if you don’t want them to have it. You should also be worrying if they’re saying they love you way at the start of things. The scammers out there are often out to get you emotionally overwhelmed. They’ll tell you whatever you need to hear in order to sneak their way into our life.

Sorry, but if they can go through the length of creating an online dating profile, the heck, they can surely create a Facebook profile. We live in a world were just about anyone who’s anyone makes use of this social media platform. If grandmothers can use it, they sure can. Once you have established that they have a Facebook account, snoop around over there too! Facebook says a whole lot about a person. Do yourself a favor and have a look at things such as the date they created their profile. If they did it as in yesterday, RED FLAG! Also take a look at the pictures, and their friends. Pretty much the same goes for twitter, although not everyone uses twitter. Google search them. Just do it. You won’t regret it. Just don’t go borderline cyber stalker here!

5. They ask for Cash

Oh hell no, you surely aren’t an ATM and the fact that they even considered to ask you for money should be having you running for the hills. Or at least in the online world, blocking and disabling them, and then reporting them. Sympathy scams are everywhere to be found these days and the victims are usually regular people like me and you, and the sad fact is that some of them honestly succeed with this trick because the poor victim is too smitten to even realize what’s going on.

Sadly, our modern culture has created a world where some people often feel the need to create a fake persona just to get a taste of what a real relationship could feel like, because they don’t see themselves as worthy of getting a real girlfriend or boyfriend. It’s a terrible reality, and what’s worse is the fact that they have perfectly innocent REAL people falling for their fake personalities in a bid to try and get whatever they can have.

Unfortunately even some of the smartest people tend to lose their common sense when the idea of romance and even love comes to light. If two or more of the Red Flags that we talked about here applies to your internet beau, then sadly, its time you considered the fact that he might not be real at all.

About The Author: Sally Reiling is the chief writer for BackgroundHawk.com, a website dedicated to educating you on dating safety, background checks, and anything to do with investigating the intentions of others.