Men really aren’t that complicated so stop analyzing! But how do you read a guy’s mind?  Hottie Gutsy Geek is going to let you in on a few little secrets so listen closely!

Lately, I’ve been receiving lots of emails from female readers asking me why men do the things we do.

I get all kinds of questions, from general ones like “how do I know what he’s thinking?” to more specific dating ones like “why isn’t he calling me back?”

Honestly, we men aren’t that complicated, you really shouldn’t analyze us so much. The simplest answer is more often than not the correct one. But that’s unfair, because I’m a guy, which gives me home court (brain?) advantage.

So I’d like to take a moment to help out all of you smart ladies that regularly read Suzie’s brilliant blog. Here are the answers to the top 5 questions women ask me about men.

How To Read A Guy’s Mind

Question 1: Why don’t cute guys at the bar come up and talk to me?

Men in public places are insecure, with fragile egos. We have a very hard time with rejection, especially being rejected in public. This makes walking up to random strangers very difficult.

I might look pimped out and confident in my snazzy new suit and Old Fashioned in hand (hint: it’s a drink, look it up), but if I see you across the bar, and you’re hot, I am instantly intimidated. Fear kicks in, because I know in order to have a chance with you, I have to cross the room, and talk to you, and very possibly get rejected.

So most of the time, I won’t do it, unless I get a very clear, very obvious, very overt sign. And remember, we’re really dumb when it comes to social interaction. If you give me a sign, make it really obvious, like direct eye contact and a smile. A brief glance then look away, or standing nearby with your back towards me is not going to get you very far.

Question 2: Why hasn’t he called me back? 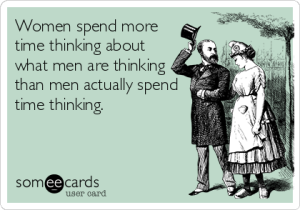 Remember, we’re simple creatures: if we want something, we reach for it. If he’s interested in you, he’ll pursue you, and you will know.

This is key! So many women wonder why he’s not answering her texts, why he doesn’t show up on dates as planned, why he keeps cancelling on her. If these are his behaviors, he’s not really interested, is he? Believe me, if he wanted you, he’d be chasing you right now, and you wouldn’t be reading this post.

In the past, I have faked meetings in another city and caught a plane down there, specifically to hook up with certain women I was interested in. The only men who play hard to get are men who aren’t really interested.

Hell, even players will go the extra mile. I have a friend who had multiple women chasing after him all the time. One day, he met a smart and beautiful woman at a conference, and was instantly smitten. He spent the next 3 months chasing her, texting her, Facebook messaging her, until they finally started dating.

Question 3: Why does my boyfriend look at other girls when we’re out together?

This one is a bit tricky. Most of the time, when we look at other women, it’s because we’re wired to look. Think of it as a natural reflex we have: woman walks by, gaze flicks towards her for a second, then back to you. It’s unfortunate, we’re not proud of it, and we’ve been doing it since we were old enough to understand what boobs and asses are for.

This doesn’t mean we’re cheating. We don’t have sex with anyone else. We just can’t seem to fight the urge to look. It’s not because we don’t love you either. On the contrary, we love you enough that we didn’t ditch you to run after the attractive blondie walking down the street. The urge to glance is just… too… strong.

It’s kinda like when you have a box of chocolates, and you promise yourself you’re only going to eat one. You’re going to break that promise pretty quickly, aren’t you?

So you need to accept our wandering eyes, and start looking too. Because we both know you wanted to stare at the braless blonde with the nipples poking through her shirt, or the muscular superman with the perfectly chiseled abs. Do it.

There is one caveat though: if your man’s stare starts to linger, this can become a problem. Remember, a quick glance is a reflex, a long stare is him being an asshole. Feel free to call him on it if he goes too far.

Question 4: What is my boyfriend really thinking about when he says “nothing”?

Ladies, honestly, when we say “nothing”, one of two things is happening.

The first is that we’re thinking about nothing. Really, really nothing.
I often get this question after sex. I usually have a goofy, satisfied smile on my face, I’m enjoying the feelings running through my body, and thinking of nothing. It’s similar to the satisfied feeling you get when you eat a big juicy burger.

The second option is that we’re thinking of something really, really stupid. Like how Vincent D’Onofrio was a pretty good Wilson Fisk in Daredevil. Or the tupperware we forgot at work is probably going to be gross. Or how funny some feet look. Or something itchy. And we’d rather not tell you and spoil the moment.

Imagine if we were completely honest with you. We’re both in bed, enjoying the afterglow, and you ask me what I’m thinking.

“I was imagining Kung Lao’s Fatality in the latest Mortal Kombat game, where he kicks the opponent to the ground and grinds his face into a razor-sharp saw, and blood and brains get everywhere.”

Wouldn’t that be romantic?

Rami is an award-winning dating expert, coach, and blogger. He teaches geeks to meet the women of their dreams. Remember, dating never ends up going the way you octopus 🙂

Read more of his shenanigans at www.GutsyGeek.com, or spam him on twitter @gutsygeek.