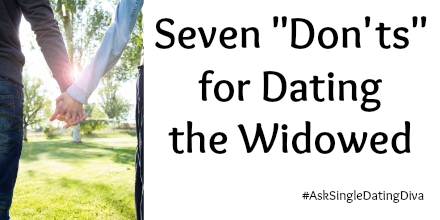 Fourteen months after my husband died of cancer, I started online dating. Some guys e-mailed that they found widowhood to be an attractive trait. One said that because I‘d never been divorced, I wasn’t “broken like the rest of us.” Another said that my long marriage indicated that I could get along with men. (I could, just not with him). But once I actually started dating, some guys said some pretty strange things. It seemed that widowhood implied that I was naive, old-fashioned or lacking in male guidance. As if being a widow meant that I was a time traveler from a more innocent and idyllic time. So, in the spirit of better dating for the bereaved, here are seven “don’ts” and one “do” for dating the widowed.

Seven “Don’ts” for Dating the Widowed

1. Don’t discuss all the people that you know who died the same way my husband did.

When you tell people your loved one died of cancer, they will often tell you about all people they know who also had cancer. Even if this cancer was a very minor mole that should be checked, no rush, by a dermatologist. Or like the date who, upon learning that my husband had died of metastasized male breast cancer, told me how his friend with breast cancer had required a really invasive operation, described in great detail, plus subsequent radiation, also graphically discussed. The widowed probably do not want to revisit the medical details of their spouse’s death. We do not want to hear about all the people you know who died in a similar fashion. Dating is supposed to be fun.

Just because someone was married for a long time does not make them clueless or cut-off from reality. Worse, having gone on a few dates doesn’t mean that you know someone. Please do not tell me to move to Paris, or to join an ashram or to get a Saint Bernard. One divorced fellow kept telling me I should pull up my roots and get an apartment in Spain. I finally realized he wanted to travel to Spain (when his kids were with their mom on school break) and wanted a free place to crash. I don’t want to sell my home and move someplace where I don’t know anyone. If you want to move to a lemur reserve, please go ahead, but don’t tell me that I should.

3. Don’t think I am super nurturing just because I was a caregiver.

I took care of someone dying of cancer, now I’d like to get out to a nice restaurant. I don’t feel a need to take care of your home or your meal service; I’m having a challenging enough time taking care of my own domestic needs.

4. Don’t tell me that widowhood is a great opportunity.

Please do not tell your widowed date that losing their spouse presents a great opportunity for them to reinvent themselves. I liked the old “me.” The new one takes a lot of work. See above; no one wants unsolicited advice about major life changes from someone they barely know. Similarly, some divorced fellows have said that widowhood beats getting divorced. I have no legal bills, no custody battles and no on-going animosity with someone I’d once loved. But I have seen my beloved die prematurely of a debilitating disease. Let’s not rate our respective losses on the pain-o-meter, ok?

5. If you are a flake, please don’t date the bereaved.

Or anyone else for that matter. It is painful to date someone who repeatedly cancels events. I’ve scheduled things to try to get out of my house on some evenings, to avoid spending all my nights alone binge-watching “Californication” and eating carrot cake. Late cancellations trash those efforts. I recently remodeled my kitchen. For over a month I was at the mercy of restaurants.The late cancellation of a meal with someone who watched her husband die of cancer AND does not have an operational kitchen ventures into sadist territory.

6. Don’t assume I want to replace my husband.

My husband and I were together for a really long time. I loved being married. But that doesn’t mean I‘m eager to replace him. Like others who have been through a major transition, I need time to adjust, to be on my own. Probably for a long time Just because I was widowed does not mean I am on desperate hunt for a new husband, even though it would be nice to have some help when the front door sticks. Nonetheless, I will not try to lure you into a premature commitment. I promise.

My hobbies do NOT include wailing at my husband’s grave site, tatting lace and buying black clothing that isn’t too “emo.” My house isn’t a shrine to my late husband. I get sad sometimes, but I won’t dissolve in front of you. On our date, I will be put together, well dressed (at least I think so), and not have swollen eyes. Finally, please do ask about my late husband. He was the major part of my life for many years and I can’t talk about my past without mentioning him. But I promise to keep it together and to be no weirder than the non-widowed daters out there. Aren’t we all trying to have fun with this?

READERS: Are you widowed or have you dated someone who was? Share you experiences in the comments below!

Debbie Weiss AKA “The Hungover Widow” writes about her dating, and other, misadventures at www.thehungoverwidow.com. You can also find her on Facebook and Twitter. She has been featured in xojane and the Erma Bombeck Writer’s Workshop.